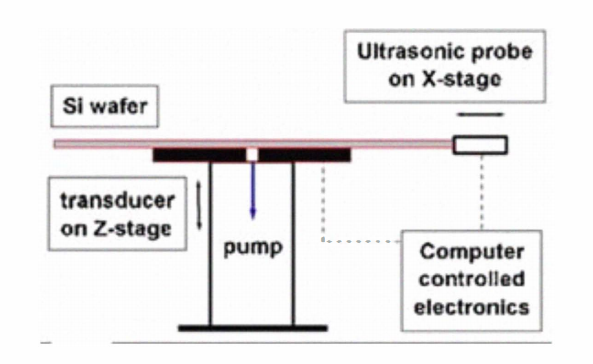 Resonance Ultrasonic Vibration (RUV) metrology offers a sensitive non-destructive real-time solution to crack detection in Si wafers. The stresses generated in the wafers by the handling device used in the RUV method may have a significant influence on the effectiveness of this method, particularly for thin wafers. The handling stresses produced by different designs of the vacuum wafer holders and their effects on the resonance properties of the ultrasonically excited wafer are studied using Finite Element Analysis (FEA) and confirmed by RUV tests. FEA results and RUV experiments show that optimization of the wafer handling stress obtained by redesigning the wafer holder does not alter the resonance frequencies and mode shapes of the wafer significantly compared to the free vibration case. Therefore, it is possible to use the RUV approach for crack detection in thin silicon wafers without significant modification.